If I want to, I can have several "skins" built with dialog templates and can move controls around, etc. A related nagging issue has to do with "when I set the controls to an address, how does the screen line-up with that choice? Its like map navigation, you want to jump from one resolution to another and not get lost, which is easiest if you work from the centers of things. Right now the program keeps track of the upper-left-hand-corner location, and an X and Y offset from that, which is where the setting matches. The math for this is shown in the upper left hand corner, with the three major components laid-out as line-items: page Table, Page number, and page Offset ( T.P.O.) These represent the course, normal, and fine parts of the address, which roughly correspond to the frame, horizontal line, and pixel. The pageTable slider is on the left, the Page number on the right, and the Offset is along the top. Page number and Offset can be dragged by touching any part of the strip, and they increase/decrease continuously, by "tugging" and nudging". All three controls allow access to the full ranage of the system, although your hand will get tired if you attempt to climb up 4 Gb of address space 200 bytes at a time.
Posted by Jamie Faye Fenton at 5:37 AM No comments: 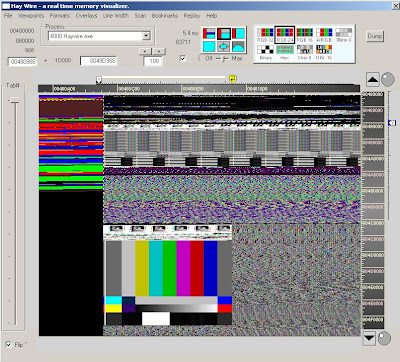 ...over at www.seductivelogic.com. The GUI has been changed a bit, hopefully for the better. In particular, it now has rotor-style scroll bars (gray with white tick-marks, shaded) for X and Y position indication. In the above screenshot, I have zoomed in on a color-bar test image I put in the program to help test the 24-bit RGB support. Its location in memory is a few pages down from Calico Katie.
Posted by Jamie Faye Fenton at 5:20 AM No comments: